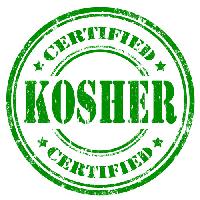 Some religions specify dietary rules to follow. One of the most confusing sets of guidelines applies to kosher foods. Kosher foods are items approved by Kashrut, the body of Jewish law that supplies the guidelines for food preparation. Not all Jews follow these guidelines but if they do, they are said to ‘’keep Kosher’’.

KOSHER is a Jewish or Hebrew word which means fit, proper or acceptable. Kosher laws have their origin in the Bible and detailed in Talmud. Foods which Jews are allowed to eat according to the Jewish Dietary laws are described as ‘KOSHER’. In addition to Islam, many other religions also forbid certain foods or have specific requirements related to food. There are Islamic, Buddha, Hindu and Jewish dietary laws.

Food has always been the subject of obligations and taboos means which food we prefer and what we consider fit for consumption and faith we adhere to. Kosher laws deal predominately with three issues: prohibited foods (pork, shellfish, and rabbit), prescriptions for religious slaughter and prohibition and preparing and consuming dairy products and meat together.

It is blatant that the daily industrial food production aimed to worldwide consumption requires supervision on the ingredients and on the whole production lines. Actually, an increasing number of companies decide to acquire a Kosher certification so that not only many Jews but also many vegetarians for example, can eat according to the rules of their cult or for natural choices. The basic guidelines of Kosher and non-Kosher depend on two variables: the source of the ingredients and the status of the production equipment. Kosher certification is the guarantee that the food meets these kosher requirements.

The Kosher symbol identifies for the consumer the food products that have been officially inspected, approved, and verified as being in compliance with this standard. We guidelines for the sources of Kosher and non-Kosher materials originate in the Bible.

Validity of Kosher certification is one year.

For more information, please feel free to write to us at info@acumic.in